Welcome to The Mustard Project, the site dedicated to research into the campus events of 1968 at the University of Essex. This page starts with a short history of the events themselves, with a bit more information about the site and how to navigate it below.

To cut a long story short…

After a spring term marked by protests over the disciplinary procedures brought against seven students who had disrupted a talk by MP Enoch Powell, the University’s Wivenhoe Park campus had come to a standstill by the middle of May. Early in the summer term, the founding Vice Chancellor Albert Sloman suspended (or ‘rusticated’) three students who had been involved in a sizeable protest against a visiting government research scientist, a Dr Inch from Porton Down, on Tuesday May 7th.

The demonstration was to have taken the form of a ‘war crimes tribunal’, with an ‘indictment’ against Porton Down’s involvement with research into Chemical and Biological Warfare (CBW) read out by a series of protestors in turn. Things became more disorderly when attempts to escort Dr Inch out of the room met with opposition, including the throwing of a tin of mustard powder over the visitor (to symbolise ‘mustard gas’), and the police were called to deal with the disruption.

Sloman’s decision, announced on Friday 10th, appeared to involve arbitrarily singling out three ‘ringleaders’ and suspending them without allowing them the opportunity to give their side of the story. This sparked outrage among students and staff alike. For a number of days the students organised a ‘Free University’, with teach-ins and discussions on a variety of topics, ranging from protesting CBW to the structure, functioning and purpose of universities themselves.

Students and staff campaigned vigorously for the full reinstatement of the three rusticated students on campus, but were also fundamentally concerned with the war in Vietnam and the lack of public knowledge and understanding of CBW. The protesting students wanted more of a say in the direction of their new university (the campus was barely five years old when the events erupted), and saw themselves as part of a much broader set of shifts in Higher Education at the time. Essex students forged connections with the national and wider global student movements, with a number of them crossing the English Channel to march in solidarity with striking students and workers on the streets of Paris. For more on the history of the events, click here. 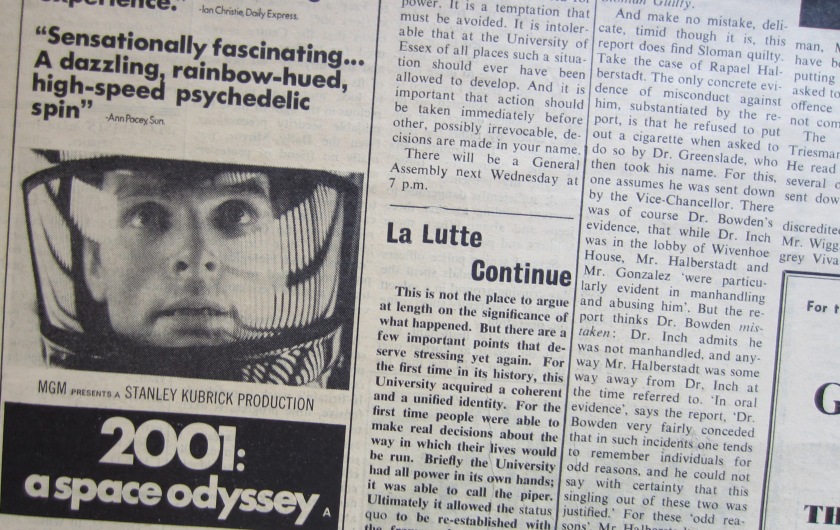 The site is currently configured for the fiftieth anniversary of May ’68, which saw the publication of archival documents associated with the May events at the Wivenhoe Park campus, on a rolling basis, on the days they were originally produced or issued fifty years previously.  These posts have been left, for now, in reverse order, with timeline entries interspersed to accompany and help to explain the documents as they appear.

Visitors can navigate the archive in various ways: you may find out more about the collections in each box by clicking the ‘Contents Outline’ options on the the drop-down ‘Archive’ menu, or simply click the same menu’s option to show all digitised materials from one or another of the boxes. You can also leap to all publications from a specific date using the calendar to the right of the page, select a specific category, or even click on one of the tags/metadata associated with each of the documents (or one of the tags in the word cloud) to access all documents with the same tag.

Finally, you can also find information about the production of Mustard: Knowledge for What?, a documentary film currently in production, as well as a 50-minute pilot version exploring the diverse motivations behind the protests at Essex.